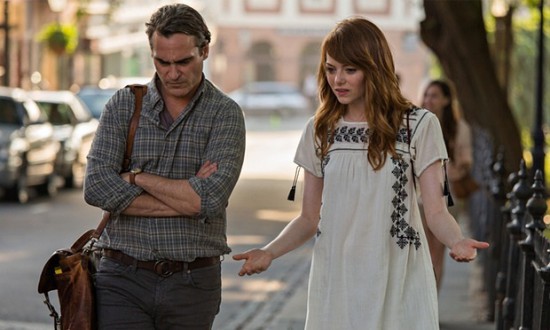 Paranoia, the ‘struggling artist’, adultery, death and the thought of committing the perfect crime are all commonplace within the creative ground that writer and director Woody Allen has explored throughout his extensive filmography. Keeping up his remarkable one-film-per-year tally, his latest project ‘Irrational Man’ revisits past themes through philosophy professor protagonist Abe Lucas (Joaquin Phoenix) who experiences an existential crisis. With rumours of his questionable lifestyle circulating round the college campus and a hip flask of ‘vintage’ malt in his back pocket, he befriends his straight A student Jill (Emma Stone) who is in awe of his knowledge and intelligence, much to the dismay of her boyfriend Roy (Jamie Blackley). When eavesdropping on a conversation in a diner, Abe sees an opportunity to give his life a sense of meaning, but at what costs?

The mystery plot is Hitchcockian in its absurdity, and Abe Lucas is used as the ideal vehicle to drop philosophical quotes from Kant and Dostoyevsky into the script, as well as delivering Allenisms such as ‘I couldn’t remember the reason for living, and when I did it wasn’t convincing’. It is gluttonous, self-indulgent filmmaking from the director who refuses to change his style, and Khondji’s neat cinematography is accompanied by a typically jazz-infused soundtrack that frequently repeats. No matter how familiar it may feel, it is comical, clever and wickedly dark. Phoenix plays the lead unlike the past few central characters in Woody’s films in that he is not a copycat version of his creator. His performance is enjoyable and works well with Allen’s most recent muse Emma Stone, who is a natural at handling his delectable dialogue. Rising British actor Jamie Blackley also impresses and is one to watch out for, but his role here is a little underused.

‘Irrational Man’ is the most fun I’ve had with a Woody Allen film since the turn of the decade, and though he is guilty of trudging through his usual narrative motions, he is doing so very entertainingly with flair and his trademark wit. Phoenix and Stone are a joy to watch as they revel in the brilliantly farcical material, both well suited to his ad lib approach. A key scene unfolds at an amusement park when characters wander into a house of mirrors, a method often implemented in cinema to convey a sense of trickery or bemusement, and previously by Allen himself. While the tricks up his sleeve, on which he wears his many influences, are tried and tested, sometimes the old ones are the best.