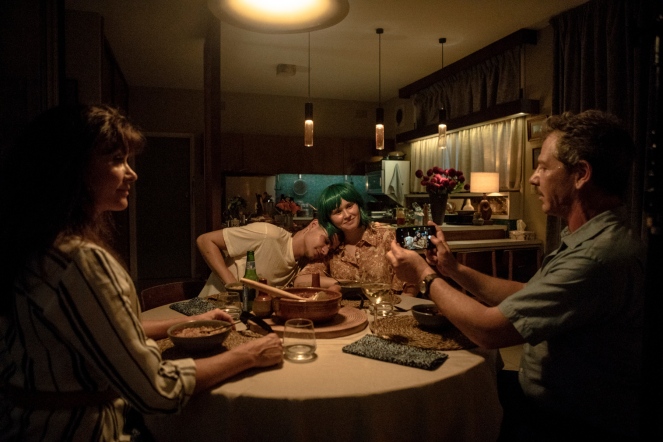 Australian actress Eliza Scanlen transitioned from soap to the big screen as sickly sister Beth March in the recent critically acclaimed adaptation of classic novel Little Women. She portrays another tragic teen in coming-of-age drama Babyteeth, the directorial debut of Shannon Murphy. Based upon Rita Kalnejais’s stage play of the same name, the plot follows high schooler Milla (Scanlen) who, whilst battling cancer, falls for Moses (Toby Wallace), a low-level drug dealer with bad tattoos and a rattail haircut. The blossoming romance is met with much disdain by her protective parents Anna (Essie Davis) and Henry (Ben Mendelsohn), who are both struggling to deal with their daughter’s diagnosis.

END_OF_DOCUMENT_TOKEN_TO_BE_REPLACED 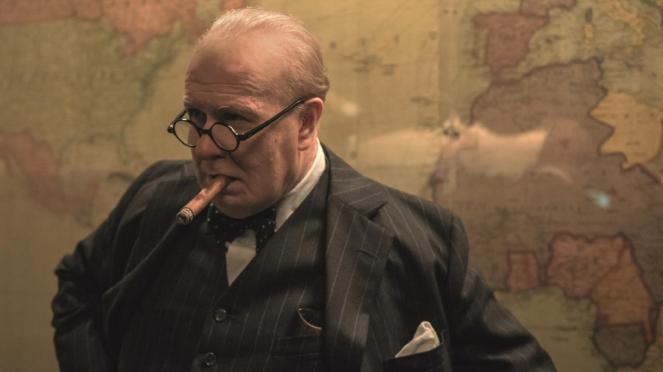 The events of Operation Dynamo, the evacuation of Britain’s troops from Dunkirk, were told on-screen across land, air and sea last year. Now the story is revisited once again in Churchill biopic drama Darkest Hour, directed by Joe Wright. As Nazi Germany continued to invade Western Europe, Prime Minister Neville Chamberlain loses control of his cabinet and is forced to resign from his position. Despite severe doubts from his party, Winston Churchill (Gary Oldman) is reluctantly appointed as his predecessor. With the support of his wife Clementine (Kristin Scott Thomas) and secretary Elizabeth Layton (Lily James), he endeavours to guide the nation through World War II.

END_OF_DOCUMENT_TOKEN_TO_BE_REPLACED

Aside from the seven episodes of cinema produced previously, other areas of the Star Wars expanded universe have long been explored through mediums such as novels, comic books and video games. A series of stand-alone spin-offs are now planned which are being referred to as the Anthology, and the first of this kind is Rogue One: A Star Wars Story. Directed by British filmmaker Gareth Edwards, it is set in between the original trilogy and the prequel trilogy, shortly before 1977’s Episode IV – A New Hope. The plot follows rebel fighter Jyn Erso (Felicity Jones), a societal outcast who is approached by The Alliance to assist with their mission to thwart the Galactic Empire’s plan to build a deadly super-weapon. Reluctantly, she agrees, teaming up with fellow rebel Cassian (Diego Luna) and reprogrammed Imperial droid K-2SO (Alan Tudyk), but the merciless Orson Krennic (Ben Mendelsohn) will stop at nothing to see his assignment through to the bitter end.

END_OF_DOCUMENT_TOKEN_TO_BE_REPLACED

In cinema, gambling has the tendency to be glamourised and sensationalised, casinos portrayed as slick, stylish dens where dreams come true and everyone goes home a winner. Showing the dirtier side of the coin, and tackling the addictiveness of the habit are writers and directors Anna Boden and Ryan Fleck, who are best known for their collaboration on Half Nelson, which told the story of a school teacher hooked on drugs. Their latest project ‘Mississippi Grind’ focuses in on Gerry (Ben Mendelsohn), a down-trodden chancer on a losing streak. At the poker table, he meets Curtis (Ryan Reynolds), a happy-go-lucky ladies’ man who likes a flutter but confidently claims that he doesn’t play to win. In an attempt to overturn Gerry’s misfortune and make enough profit to repay his debts, they embark on a betting-fuelled road trip down the Mississippi River.

END_OF_DOCUMENT_TOKEN_TO_BE_REPLACED

When it premiered at Cannes festival last year, Ryan Gosling’s hotly anticipated directorial debut ‘Lost River’ was panned almost unanimously, which, as a fan of him as an actor only made me more intrigued to see it. Since the negative initial reaction, it has been tweaked and tinkered for its cinema release with a little shaved off the running time. The title refers to the environment in which the film takes place, a warped wasteland where the American Dream has gone horribly sour. The intertwining plotlines follow three main characters in struggling single mother Billy (Christina Hendricks), her eldest son Bones (Iain De Caestecker) and their neighbour Rat (Saoirse Ronan) as they desperately try to better themselves and their lives, looking for a way out of a decaying habitat with no economic promise. Plucking apparent influences from his pool of experience within the industry, the first-time filmmaker forges his own vision of fractured dreams peppered with fantasy neo-noir elements and striking imagery.

The marketing of the release sprung obvious comparisons to the work Gosling has done with Danish director Nicolas Winding Refn, and the neon-tinged palette and occasional usage of extreme violence brings that to fruition. However, I feel there is more of relation to his collaborations with Derek Cianfrance in terms of the narrative, like the spiritual cousin of The Place Beyond The Pines if you will. As the story develops and begins to take shape, Billy and Bones take risks to make ends meat and keep their family afloat, and events turn from strange to downright bizarre. Throughout though it remains both visually and audibly interesting, the spellbinding soundtrack from Johnny Jewel providing haunting nostalgia.

The success slips slightly in the core performances of the piece, and I was left wanting a little more from Hendricks and De Caestecker. Perhaps the characters fall victim to drowning in the heavy scenery. Memorable villainous turns come instead from the supporting cast, with Aussie bad boy Ben Mendelsohn steps in with real menace as a sadistic Lynchian-lunatic and Doctor Who’s Matt Smith bellowing expletive-laden chants to mark his turf, viciously taking scissors to those who cross him. The souls that dwell in the utopian-fairytale setting of ‘Lost River’ are radical, often completely unbelievable, but fascinating to be in the company of.

It can be argued that none of Ryan Gosling’s vivid ideas are his own in his first dabble into both writing and directing a motion picture. Conversely, if you’re going to beg, steal and borrow from those that inspire you as an artist, he’s chosen an eclectic bunch, and importantly includes a flavour of the cool guy personality he has an actor to the proceedings. His Hollywood reputation has unfairly preceded him in the infancy of his career in the director’s chair, and his work appears to be getting judged only on its intrepid and admittedly copycat style rather than the subtleties of its substance. Putting this to one side, as a feature debut, ‘Lost River’ is bold, brave and dare I say it, brilliant.

The complex father and son dynamic at the centre of David Mackenzie’s prison drama ‘Starred Up’ helps raise the bar for behind-bars British cinema. The well established film environment is refreshed by rising star Jack O’Connell who plays lead role, Eric Love; an unpredictable force who is volatile and vulnerable in equal measures. When his reckless, extremely violent tendencies cause him to be ‘starred up’ prematurely from his young offenders institute to an adult unit, he is reunited with his father, Neville (Ben Mendelsohn) offering up a clever twist to the genre formula. As officers struggle to rein in Eric’s explosive outbursts, prison therapist Oliver (Rupert Friend) employs his patient techniques to try in an attempt to become a calming influence in the troubled youth’s life, but will he succeed when Neville is on the scene with his own methods of discipline?

Written by former criminal psychotherapist, Jonathan Asser, the script is raw and affecting, and feels very authentic, crafted through a wealth of experience in the field. The carefully constructed story contains believable, multifaceted characters which avoid stereotyping and are well placed within the claustrophobic grid like confinements of jail. Immediately after his cell door is slammed shut, Eric empties his belongings and meticulously manufactures a deadly weapon by melting a razorblade into a toothbrush and hides it in a strip light. This instinctive survival routine highlights the kind of upbringing he has endured, demonstrating his lengthy relationship with violence. He soon makes his presence known on the wing and by then the prison politics are in full swing, creating an unnervingly tense atmosphere where trouble is brewing around every corner, and could boil over at any minute, and will.

The performances give solid substance to the in-depth inmates, both O’Connell and Mendelsohn are flawless in their harrowing depictions of mixed-up criminal minds. From his breakthrough performance as James Cook in teen-drama Skins to his supporting film roles in Harry Brown and Tower Block, O’Connell is no stranger to playing the wild and unhinged, and sports a ‘Jack The Lad’ tattoo on his upper arm which most of his characters suitably adopt. Here he has taken it to a whole new level. He carries off the difficult feat of displaying smouldering rage whilst evoking an air of sympathy towards Eric’s unfortunate set of circumstances. His scenes with Mendelsohn are thrilling, and emotionally charged, as Mendelsohn himself has a strong knack for parts with similar impulsive characteristics, his memorable work in Australian gangster film Animal Kingdom resonating. His wiser, yet equally flawed Neville Love doesn’t want his son to grow up to be like him but lacks the paternal influence to stop it happening.

Mercilessly dark in its subject matter, and dogged in its execution, ‘Starred Up’ is the 21st century Scum. The camera closely stalks the figures of machismo like that of a wildlife study, waiting for a hapless prey to be torn limb from limb. O’Connell’s central performance is terrific and as strong as anything I’ve witnessed in a long while. This marks his most powerful piece to date and will raise his profile no end. The vicious plot proves to be as unpredictable as the criminals involved it, resulting in a white-knuckle watch trapped in a tight space and making it a sentence worth seeing out to the bitter end.