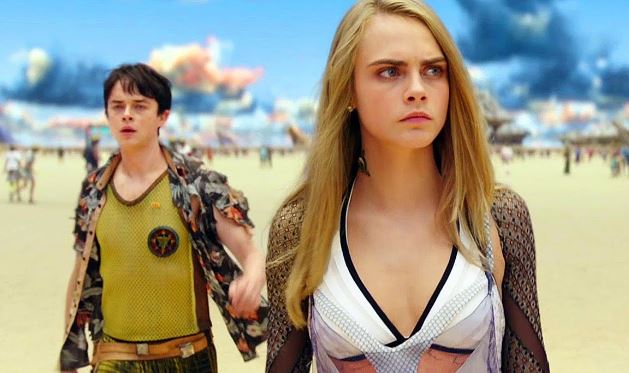 Veteran filmmaker Luc Besson certainly has a vivid imagination, and is associated with French 1980s movement ‘Cinéma du look’ which is said to favour style over substance. His latest feature is sci-fi space opera Valerian and the City of a Thousand Planets and it’s arguably his most visually daring project to date. Based on a comic-strip series devised by Pierre Christin and Jean-Claude Mézières, the story follows operatives Major Valerian (Dane DeHaan) and Sergeant Laureline (Cara Delevingne) who are tasked with protecting the universe around 700 years in the future. When their peaceful city of Alpha comes under attack from a mysterious life form, they team up with commander Arün Filitt (Clive Owen) to neutralise the dangerous threat.

The patchy plot unfolds across a striking but strangely unsophisticated futuristic landscape, like a clunky Blade Runner level in Super Mario World. Nonetheless, it is very impressively constructed and works well with the Star Trek-esque sense of adventure and exploration the material possesses. Whilst the visuals appear to be built with care and precision, the screenplay, in contrast, is slapdash and lazy, riddled with cliché that is out of place against the brightly coloured utopian backdrop.

In amongst the neon candyfloss aesthetics, there is a romance narrative at the core of the film. Though DeHaan and Delevingne are likeable enough in their leading roles and display genuine screen presence, they are forced to muddle through dark-ages dialogue to express their feelings for one another. Their relationship unfortunately conjures up a flurry of eye-roll moments rather than any sense of chemistry. In fact there’s a lack of memorable performances across the board as the cast play second fiddle to the high concept but convoluted storytelling; Clive Owen hams up his part as the cowardly baddie, stomping around dressed as a bizarre cross between the Green Power Ranger and a train conductor.

If audiences can embrace the silliness of the spectacle and get lost in the gorgeous graphics then Valerian and the City of a Thousand Planets does provide enjoyable escapism, but it’s an example of Besson’s visionary directing rather than impactful or meaningful writing. There’s fun to be had in letting this frivolous approach to filmmaking wash over you, but the flaws ultimately rise to the surface.